Vossloh's corporate headquarters in Werdohl has been comprehensively modernized in recent years. The architectural benchmark is the Technical Centre, newly built in 2011. The decentralised electrical distribution was consistently implemented here.

Vossloh is a global transport technology group with a rail transport product spectrum ranging from sleeper clips to locomotives. The medium-sized SDAX Group bundles its activities in two divisions: Rail Infrastructure and Transportation. Rail Infrastructure with its three business units Fastening Systems, Switch Systems (Vossloh Cogifer) and Rail Services focuses on products and services for rail infrastructure, while Transportation comprises Transportation Systems and Electrical Systems (Vossloh Kiepe). Vossloh was founded at the end of the 19th century as a typical Markish family business.

In 1883, the Werdohl blacksmith Eberhard Vossloh was awarded the contract by the Royal Prussian Railway to manufacture spring washers for rail fastening. The company grew, diversified - including into the field of lighting technology - and then returned to the railways as its core business. The company headquarters is still located in Werdohl today. A family-owned blacksmith's shop has become a stock corporation with more than 5,000 employees and a turnover of around 1.25 billion euros.

Dynamic architecture for a company on expansion course

Vossloh's corporate headquarters in Werdohl has been comprehensively modernised in recent years. The architectural benchmark is the Technical Centre, newly built in 2011. With its unconventional, inclined front and rounded corners, the building is intended to reflect the modernity, dynamism and innovative strength of the company. For the facade design, the Lüdenscheid-based office for industrial and commercial construction Wilde - Kutzner - Teichert Partnergesellschaft Architekten opted for a cladding with silver-coloured panels and a dominant solar protection system from the Lübeck-based solar protection company Wings Professional Project. The elliptical slats of the system automatically track the position of the sun so that the interiors are protected at all times from overheating by direct sunlight.

Due to the very narrow slat profile compared to the width, visual contact with the outside world is maintained. During the modernisation of the neighbouring administration building, which dates back to the 1970s, façade panels and solar shading were used, so that a consistent design character of the building complex was achieved. Product development and quality control with its testing laboratories are bundled in the Technical Centre, which covers around 2,800 square metres. On the upper floor, flooded with light, there is also a showroom and offices - including for the management - on the ground floor there is also the representative reception area of the company.

For the electrical distribution in the new building, a decentralized solution was used from the very beginning. Power and data are distributed via consolidation points in the raised floor. The floor boards are individually covered with oak parquet - a solution that contributes to the high-quality appearance of the Technical Centre and at the same time provides easy access to the consolidation points. In the corridor areas and in the showroom, the raised floor is designed as a heavy-duty floor due to the sometimes very heavy exhibits. Sockets are found almost exclusively at the workplaces themselves, the only exception being a few wall sockets for cleaning the rooms. By opting for an EVOline solution, a significant cost saving is achieved. The radial electrical wiring required for conventional solutions is replaced by ring circuits. The amount of cables (and thus costs and fire load) that can be saved in this way is shown by a comparison with the effort required for data cabling, which must continue to be radial. Further savings with a simultaneous gain in flexibility can be achieved by changing from floor boxes arranged in a fixed grid to outlet points positioned as required.

At the Technical Centre, the principle of decentralised electrical distribution is upheld down to the last detail. Two green ring lines provide a separate power supply for EDP and normal current. Five poles of each of the two 10 mm2 cables are removed with clips - this is also possible with the cables live - and then three three-pole cables are converted into two three-pole cables at the Consolidation Point. The three red cables are used exclusively for sensitive EDP applications; three black cables supply sockets for normal current. The circuits are protected philosophically by fuses and fault-current switches in the consolidation point and thus as close as possible to the potential fault location. In the event of an fault, not the entire office is switched off, but only a limited area. In addition, the EDP circuits are not affected by a fault in the normal circuit. The data is distributed in radially via pre-assembled trunks from the leading cable manufacturer Nexans, so that the specified transmission speeds are guaranteed and do not have to be measured individually. Reserve ducts make it possible to easily increase the number of workstations if required.

Systematic electrification continues at the workplaces. The cables are routed directly to the respective desk via outlet points to an EVOline dock. The three sockets of the dock are supplied with normal current. This provides sufficient sockets on the desktop for the connection of varying devices. A switch on the left of the dock is used to switch the EDP power on and off. The corresponding red cable is led to the tub under the worktop. There, an EVOline Express strip offers connection options for plugs and power supply units. In this way, the consistent separation of sensitive EDP circuits from less sensitive, but error-prone standard circuits is ensured right up to the workstation. Power and data lines are labelled all the way from the consolidation points to the socket, making it much easier to locate and eliminate any problems. 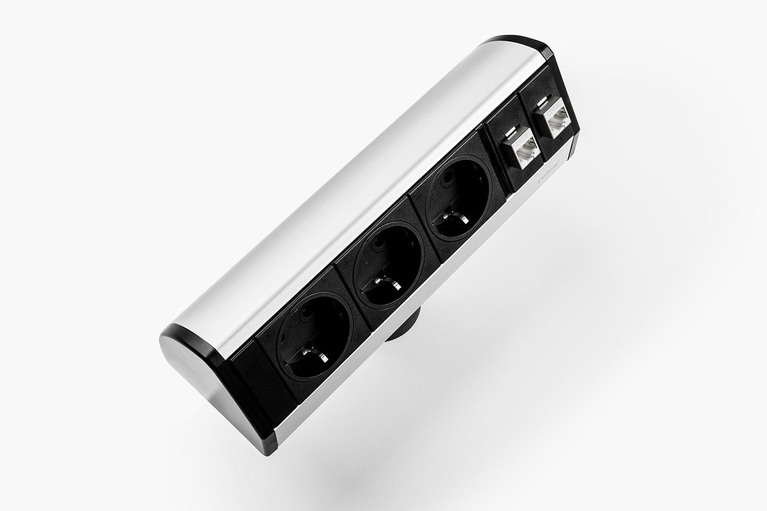 The EVOline Dock floats above the table surface, thus ensuring as much free space as possible. 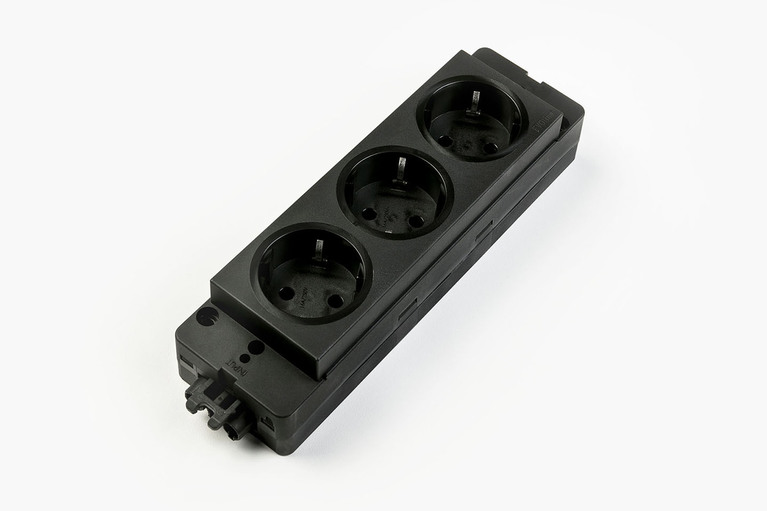 The EVOline Express separates circuits of sensitive devices and protects against overload and fault currents. 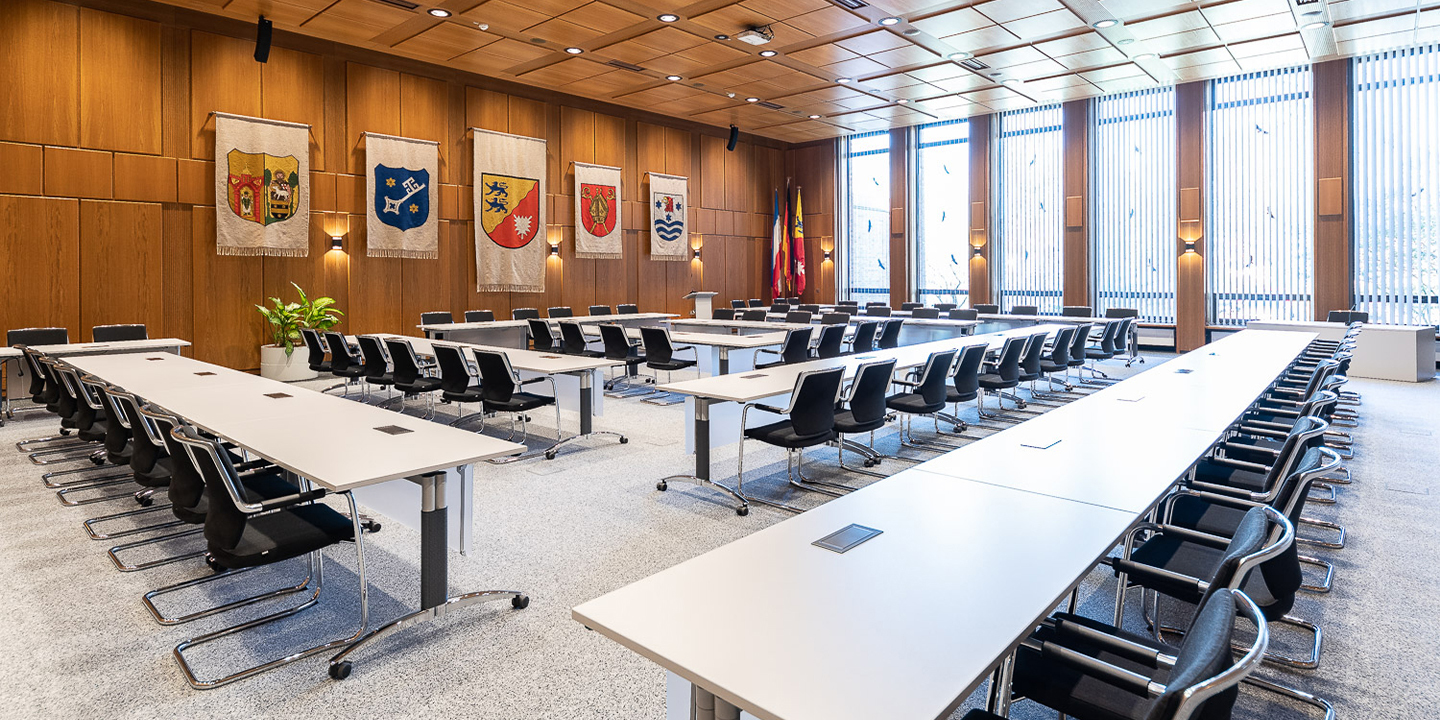 In order to make smart decisions in the digital age, Rendsburg has picked intelligent electricity and data solutions.

A varied office landscape on around 1,000 square metres 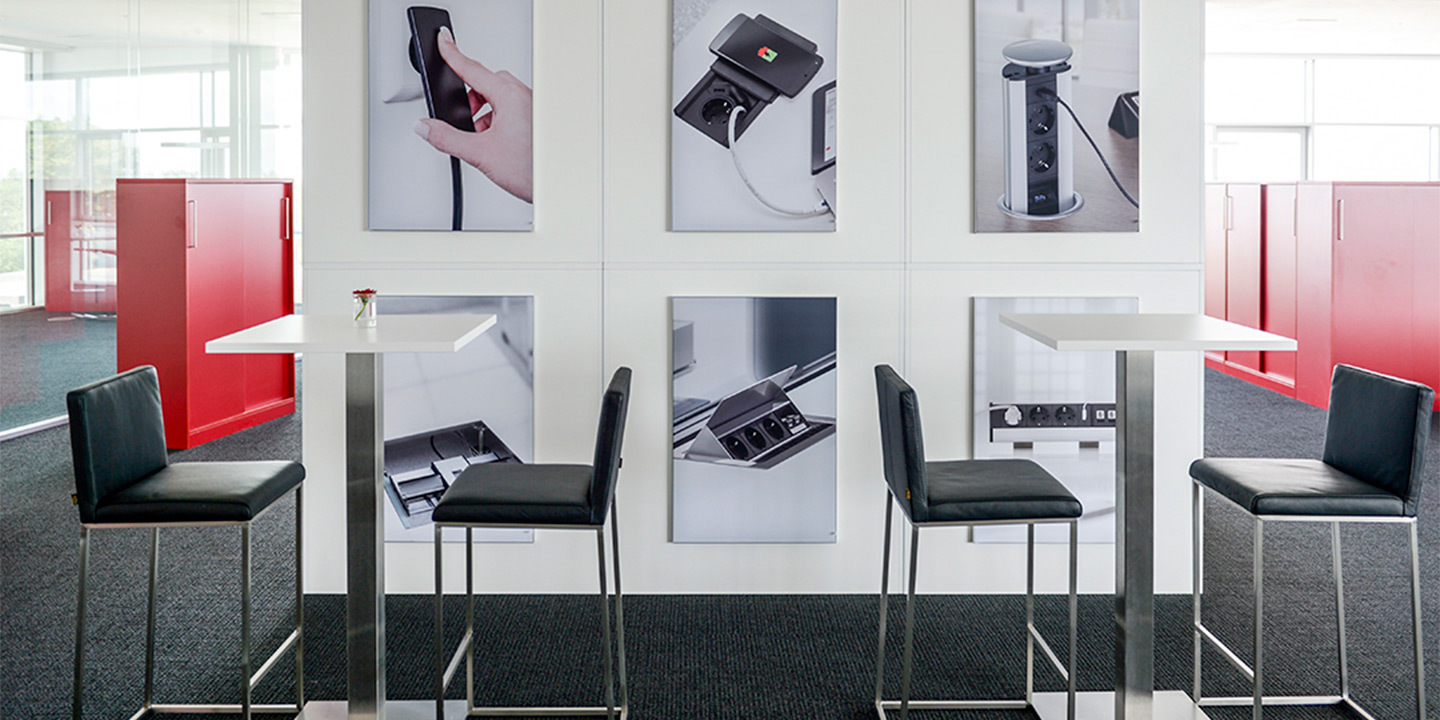